From inside the Austin Convention Center

Writer, filmmaker, and Serbian native Jasmina Tesanovic is best known for her work documenting war in the former Yugoslavia. She visited the Austin Convention Center, where many storm victims are being sheltered, and has this to say about the people she encountered.

I am entering the Convention Center in Austin. Unlike the refugees an police, I have no ID, no tag on my wrist, just my ragged handbag and my lap top.

Nobody asks me anything, though I notice, all the people inside the camp are tagged with different colors, and there are security men and women all over the place.

In this huge no man's land, there are so many nobody people that a woman like me can pretty much become one of them. After few moments of my wandering I am offered a cheese sandwich, information on where to queue for food stamps, and a wif-fi hotspot for my computer.

"Do you need some clothes?"

Well, I could do with some clothes...

Here people are mostly black, of all ages, of all sizes, of all shades of color, but there are some like me too... Middle-aged white women from nowhere, feeling at home almost everywhere, when it comes to disasters...

This center for refugees is well-organized, compared to my ex Yugoslav experience. It has air conditioning, abundant cooked food, extremely clean bathrooms and well-behaved people. Nobody is crying, nobody looks depressed yet, nobody is even fighting...

Warnetta and Johnnetta are approaching me. Warnetta is simply dressed with long black braids, and Johnetta is all dressed up in red, fancy red make up, literally red long hair, jewels, she is gorgeous.

Johnetta says to me: I need somebody to take over my group tomorrow after school; I will not have time to handle them...

Oh, I say, tomorrow I will not be here.

Johnetta looks at me in disbelief. But you can tell me who can help me, you are the woman in green.

No, I am here just to see you and write about you. Can I take a picture of you? 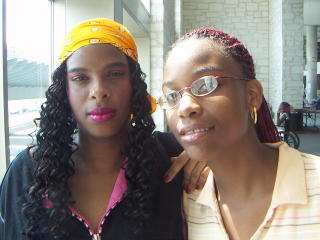 They gently embrace and smile: Johnnetta says, we love it here, tomorrow I am starting to work, nine dollars per hour, everybody is so kind to us here, we have no home but I don’t mind, I have my five kids, four are taken care of in the kindergarten and this is Warnetta my oldest, but she makes me look old, I am thirty three and I don’t want to tell she is my daughter, she is 14... They will never fix my home town properly and we will never go back... because they all knew it was coming and it will come again... but they never do anything to build us good homes, to give people money to build them...

Barbara Bush, the wicked grandma, gave an interview only yesterday, chuckling how poor people will abuse the hospitality in Texas and never go back home. Is THIS what she meant? Her cynical remark was not meant to be cynical; it was a threat, for Johnetta and Warnetta who want to rent a place and stay in Austin until somebody fixes their town PROPERLY.

Both sides know pretty well what they are talking about; Barbara and Johnnetta are quarreling.

"Ma’am, how are you doing?" I am patted on my shoulder by a perfumed elderly volunteer. "I see you managed to rescue your computer."

I'd better play the refugee after all, it is the safest place in this messy country I guess: not that I am far from that condition. I've been a refugee in my own country. This time I am refugee in somebody else’s country. I can tell the difference now.

Is there any? Fay looks just like me. Fay sits next to me, presuming I was just like her: somebody who only a few days ago had a great life and didn’t know it, who took life for granted. Well, how else, I say, one cannot always be a refugee? Or maybe yes, she says, maybe from now on she will always be a refugee: she is a journalist and now she will become a writer she says; exactly like me.

She will become the main character of her own stories. And it will feel good, I promise her. Here I am still feeling good about it and writing.

At a corner of the huge circular building, black male teens have a basket and are playing basketball; tall handsome swift and deft. Some will join the NBA some day. Around them are children perfectly healthy playing games in wheelchairs; there are also some people in the wheelchairs paying no attention to the bored kids. In the corner watching them a pretty girl is sulking. The basketball player comes up to her and cuddles her: she is angry with him... he is neglecting her... a new romance, for the black Romeo and Juliet in a refugee center. At least they are alive and will stay so; away from their parents it seems, I wonder if the parents are alive...

"My husband had to leave too; he stayed until the very end but then it became dangerous, looting and shooting and the diseases... the smell, oh the smell... dead bodies, the heat...." The old black woman's nose is quivering: she is very well dressed and well-kept, everybody is fussing around her, but she seems to be alone and wants to stay alone.

Where is your husband, I ask?

She is silent, her eyes are blank... In my country too, old people preferred to stay at their homes, whatever may happen. Is there such a thing as homeland after all, I wonder? Or is it lack of courage and energy... why did she make it here and he didn’t?

Who is this old respectable thin woman staring out of the window in silence?

The other old woman is all dolled up; she is sitting in the terrace, chain-smoking, chain-talking. The chair next to her is empty. People come and go and listen to her, but she never stops talking. She has thin legs and a big belly, a pretty old face and fancy sexy clothes: everybody seems to know her. They are offering her stuff and want to help, to carry her, amuse her, bring her music. But she talks and talks only. She reminds me of a raped woman who compulsively talked after she escaped the war zone; she talked sweetly and mildly of everything, even of her rapist... This woman is telling us all how happy she is with life as such, happy to be alive, happy to be here.... I wonder when she will break down, from that chair, from that cigarette to which she is clinging to as if it were a pillar.

I guess she needs a drink, but nobody drinks here.

A desk with pretty young white girls has several posters: child and women abuse. I approach them, they give me their material, they have shelters, therapies for all situations. They are local feminist groups present in the center.

I hear live music, it is melodic and rhythmical as in films I saw from New Orleans, a black old man is singing with his guitar, joined by another younger one who has some kind of flute, the on lookers are stamping their feet and clapping their hands... some are joining in.... not many, but I hear they are planning a party... I wish I could be there...

But then, they start playing the American national anthem, people stand straight and a big applause ends it. Is that their patriotism? Is this America?

What about the global warming that made all this happen, what about Iraq?

A young man from New Orleans was telling this morning how he plans to go back even though his house is destroyed, and to MAKE sure that the city is rebuild in a proper way: that the politicians don’t steal and waste the money; that right guys get in charge and start anew, make a new go of it, this time on proper roots.... Everybody could tell this disaster was going to happen, why didn’t anybody do something about it?

Corruption, racism, classism.... Bush is a spoiled rich kid and behaves as such....

No, I say, he is a war criminal: all the money the world is giving now to US, money from the poorest countries in the world, may as well be used for the wars against the same countries that are giving the money. What a thought? You should secede... from Bush.

Somebody in a county of Louisiana already proclaimed secession, that to draw the attention of the press and the administration, as a trick of course...

What a thought! I really meant it...

The barber’s shop; finally I see how black hair is neatly and patiently done in braids, dreads, colors.... I myself may give it a try. Many years ago, when my white friend from Serbia was attacked by some black people because she was presumably white and rich, she said to them a historical phrase we all white refugees quote here in black US: I come from a country which is in civil war, even if we look exactly the same.

Some military guys appear behind a neatly set desk. Next to them is a desk with a sign; We Support Our Troops, veterans. Well, good thing that troops are supporting those people here, if indeed they are.

And the wifi Internet access I am using while writing this is called Tsunami, it is excellent and free. Kids are gathering around me to play with my computer. Boredom is the biggest killer in places like this. Even if you have your needs met, the definition of being a refugee is being left without your day; be it in a palace, be it in the gutters. Women cope better than men usually speaking, children best on the long run.... They may even realize Mrs. Bush’ s fears and stay in their new homes as if their own, making the old settlers run after their survivor's energy and skills.

I am looking at a beautiful baby toddler, a girl, she is playing with my bag, smiling and chirping. I pat her, tickle her; her father is huge and angry, he takes her by her belt and picks her up like a mother cat. She is screaming her head off, she wants her doll back, that’s me, I want my girlfriend back, that’s her... but we will never meet again. I am taking a picture of her, one of those faces I will never forget.... Her mom is missing.

A pang; I miss my grown up daughter in Serbia: she used to be small and dark and a refugee too... About 4,000 people here, an Austin volunteer tells me, giving me his email so I can send him my text. More people are coming in but some are already leaving, to other places, relatives, new jobs, new homes... They are not called refugees, they are called "evacuees."

Elderly well dressed couples from Austin show up in the afternoon, strolling among the evacuees smiling broadly and kindly at all of us. When they asked me, with the air of Princess Diana, "How are you doing? We see you managed to get your computer out," I didn’t have the heart to tell them that I was from Serbia, and that I am doing fine.

Feel free to come and check it out if you get time :-)